Jennifer L. Aycock often cries when she reads Colossians 1:15-23 because of the hope in Christ it instills, the hope in reconciliation he alone provides, and the hope that is possible through the unity of the Church as a witness in an increasingly empty, hopeless, and disconnected world. She is Christ’s sister and friend, saved and liberated one, and he calls her to himself. Out of this calling, she considers herself first and foremost an ambassador for the reconciling peace of Christ through the ministries of community development, preaching, discipleship, and leadership. Jennifer wrote her first poem when she was 6 and has been writing ever since, giving increasing academic attention to the intersections of mission and women; ethnicity, race, and religious identity. She has a great passion to bear Christ witness through the social and cultural dimensions of faith and to equip others to do the same. While she may be a nerd, her favorite thing is to simply care for people, wherever in their life they find themselves, with encouragement, food, tea, love, grace, and truth. Since age 14 God has granted her the great grace to serve and testify in Brazil, Mexico, France, Washington, D.C., Chicago, North Africa, southern India, and Sri Lanka. Upon completion of her M.Div. in December 2012, she will begin preparing to relocate to urban France (maybe Paris) to serve the church and the margins within the country she loves.

Anne Blythe‘s life can be summarized by the agonizing, glorious pursuit of understanding what it looks like to obey Jesus when He says, “Come to Me.” She loves people and is always on the look out for kindred spirits as well as people who are very much not like her. Her career of transforming education in developing contexts is informed by the foundational belief that we should use our minds to really know people who are Other and consequently show them love in meaningful ways. Anne loves languages of all sizes and shapes and can’t stop her insatiable curiosity. Writing is perhaps the most significant way that she recognizes Jesus coming in to dine with her, and she with Him. (*Anne is not her real name, but works in some sensitive places, thus this name to protect her and her contacts.)

Abigail (Cooley) McFarthing enjoys mountains, playing guitar, teaching, ethnic cooking, her husband and Jesus (not in that order). Having studied English and Secondary Education at Wheaton, she has worked in education in three continents: a rural Zulu-speaking context in South Africa, a multicultural inner city high school in America, and a special needs school in England. God has taught her much about humility and joy in the process. She met her British husband in South Africa, and they pursued a trans-Atlantic, trans-hemisphere romance until getting married three years ago. They still pursue that romance, but they now have the advantage of being in the same continent. They live in Cambridge, where Abigail revels in the history, the architecture, and the “English-ness” of it all. They love being part of a large, lively church with members from 25 nations, and they co-led the youth group for two years before handing over the leadership. Abigail writes songs and leads worship regularly, with a penchant for multi-cultural praise. She has been working for the past few months at the Faraday Institute for Science and Religion, a non-profit seeking to help Christianity and science not to fight each other so much.

Bethany Pledge Erickson studied English literature and theology at Wheaton College. She’s an avid reader, a deep thinker, and laughs a lot. She and her husband, Joel, are active in their Anglican church, but she’ll have to sneak off once in a while for a little exciting and charismatic worship, due to growing up the daughter of parents in ministry in the Assemblies of God church. As of October 28, she is overdue with a daughter.

Charles Rogers is an adolescent medicine fellow at Children’s Hospital of Philadelphia and a master’s student in applied psychology and human development at UPenn. A former homeschooler, he attended Louisiana Tech for undergrad and LSU New Orleans School of Medicine for his MD. As a physician, teacher, and researcher he is interested in untold stories of resilience in homeless youth, teen parents, refugees, and other youth with challenging backgrounds. Deeply committed to the Church, he is discerning how to use his calling as a physician in service to the Body of Christ. Charles bakes amazing gluten-free bread and apple pies for his wife of three years, Emily. 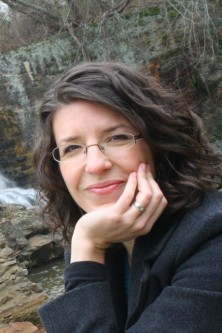 Anne Raustol is the mom of three, Isabel, Espen and Oliver, and wife of one, Ole, who is from Norway. In case you wondered, she is frequently trying to alleviate some type of guilt: not parenting well enough or enthusiastically enough, not writing enough, not balancing her various writing urges, not doing enough to love those who are in need, not calling her grandmother enough, not being organized enough.   In the magical moments, she is able to lay the guilt in the hands of Jesus and for a time feel the peace of knowing that God is bigger than the marathon going on in her brain, that he is the great reconciler.  And it is in that freedom and the angst of the pursuit of it, where she finds most fuel for her writing.  Anne loves spending time with fellow tortured souls whose belief in and practice of the Christian faith is wrought with ponderings.  She received her MFA from Bennington College  in 2001 and is working on a young adult novel and various short story projects.

Lauren (Smith) Gyorfi is a wife and mother of two adorable boys.  She married her husband, Paul, seven years ago and together they are seeking to live out a life of simplicity in a diverse community.  Lauren graduated from Wheaton College with a degree in Christian Formation and Ministry.  In South Africa, on a six-month internship, she noticed that the disparity between the rich and poor, and the disconnect between the different ethnicities of South Africa were little different from the division in her own community in the United States.  She went on to pursue her master’s degree in social work and currently works part-time as a social worker in the public school setting.  Lauren and her family live in a diverse neighborhood where she enjoys having the neighborhood children over to play, harvesting fresh vegetables from her husband’s impressive garden, and loving on her boys.

Barbara Shafer writes and blogs at www.seminarygal.com. Barbara’s heart is to make the theological understandable, particularly for those who need answers regarding suffering and those seeking to reconcile the Christian faith with science. She enjoys apologetics (defense and explanation of the Christian faith) and systematic theology (understanding how the Bible itself supports various aspects of Christian doctrine), but she believes the heart of Christian evangelism is love and compassion. Barbara has a master of divinity from Trinity Evangelical Divinity School and a master of science in horticulture from Texas A&M University. Barbara has survived the loss of her daughter at birth and cancer, both of which have enabled her to share the comfort she herself received. Barbara and her husband Warren, the parents of two grown children, live in Chicagoland, where Barbara enjoys church work, gardening, cooking, and creative arts.

Rory Tyer is currently earning his M.A. in New Testament Studies at Trinity Evangelical Divinity School in the suburbs of Chicago. He is originally from Virginia and is an avid reader, writer, and singer/songwriter whose music can be found on iTunes. He blogs regularly at rwtyer.blogspot.com, posts some of his creative pursuits at rorytyer.virb.com, and is on twitter (@rorytyer). His favorite book is Watership Down, his favorite webcomic is xkcd.com, and he misses the Blue Ridge mountains most of the time.

Anna Zimbrick, the best (and only) sister of this blog’s Editor Emily Zimbrick-Rogers, is a first time blogger.  She enjoys writing mainly because she loves sharing stories (at times in painful detail!) and connecting with other people. She lives in Quito, Ecuador, where she works for an NGO (non-governmental organization). In her free time, she trains with a running club in one of the parks, hangs out with friends (eating, coffee, dancing, the typical occasional movie), goes to the grocery store and enjoys Ecuador’s natural beauty. She is deeply committed to her friends and family and believes that one of the ways we richly experience God’s love and kindness to us is through the close, loving relationships He brings into our lives. She hopes her blog entries will challenge and/or encourage you, or at the very least, be mildly entertaining.

Emily Zimbrick-Rogers, trying to steward her calling as a writer, has started this blog to create a community of like-minded people on the intersection of faith, art, and equality. Emily has a master of fine arts in creative writing from Old Dominion University and a bachelor of arts from Wheaton College. An avid (rabid?) Wheaton alumna, she might have recently put a note on a car windshield introducing herself after seeing a small Wheaton parking sticker on the back bumper. A trip to Oxford for a conference this summer led her to connect with the (Christian) Graduate Women’s Forum, where she was enlivened by the possibilities for collaboration between academics, theologians, and creative types who can bridge or translate good biblical feminism to the non-academic reader. Emily is also passionate about mentoring young people, gluten-free baking, and finding friends in her new city of Philadelphia with her husband of three years, Charles.