Conversations on women’s identity can bring out the worst in us.

I have two friends. We’ll call them Aziza, from a Farsi-speaking country (i.e. Afghanistan or Iran) and Samantha, a stoic from the British Isles. We’ll say they live in Chicago.

Not very religious herself (but interested in Christianity), Aziza is married to a devout but egalitarian Muslim, with two children. She recently finished a grad degree in something she didn’t really care about and hasn’t had much success finding a job. She wants to stay in America or Canada and would not be very safe in her own country.

A devout and conservative/complementarian Christian, Samantha is married to a military man with no children and has spent the last several years miserable in America and not working (other than babysitting for a military friend).

Aziza reported this interaction between them. [Some creative license has been taken, but the soul of the conversation remains.] 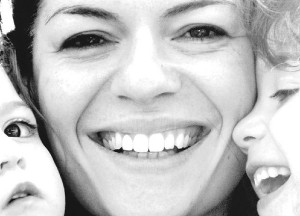 The caption on Flckr for this: "A mother is a complete woman!"/ Photo Copyright Dimitris Papazimouris/Flckr

Samantha: “Why don’t you like staying home with your children? That’s a good job.”

“Being a mother is not a job!” Aziza replied. “It’s a relationship, which is important, but it’s not a job!”

“Being a wife and mother is the only job I think women should have,” Samantha said. “When we have children, I will stay home with them.”

Aziza began getting agitated. “Women who stay home are lying if they say they are happy and they are all depressed! [My 7-year-old] told me a girl at school only wants to be a mommy when she grows up, and I told her to stay away from that girl because she’s stupid and dangerous.”

Samantha gripped her hands on her chair, sipped her tea.

Often we don't know what our conversation partner is thinking.../ Photo Copyright by Steve McFarland/Flckr

Aziza didn’t notice Samantha’s growing agitation, so she continued. “And I think American women can be very stupid, because they have all the freedom and opportunities to have jobs, to get education, and they waste their lives sitting at home! They don’t have visa trouble and they are wasting their brains!”

Samantha rose from the chair and shouted, “If you don’t like it in America, why don’t you just go back to your country!”

Aziza, a person not afraid of running from the police in her youth, suddenly felt frightened that her friend was going to physically attack her. She said she had to pick up her daughter from school, and quickly left.

In fifteen minutes, the friendship was over. In a few carelessly passionate words, all the work for the Gospel that Samantha had patiently worked toward in Aziza’s life was wrecked. 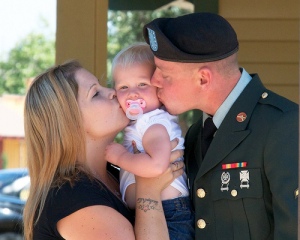 As an outsider who had a similar encounter with a woman who insisted I was a military wife and should be grateful for all the military had done for me, I see how much we bring our own insecurities and perspectives to every encounter. In my own similar conversation, I demanded that she not consider me a military wife, because “that’s not the identity I have chosen.”

“Some women,” I said, trying to be kind, “identify strongly and find meaningful being a ‘military wife,’ but that’s not who I am.” I might have unwisely added something about the military taking advantage of women’s free labor… I knewthis woman was divorced from a man who had been in the military for twenty years, yet I couldn’t –or didn’t—think of her situation more highly than my own. From Philippians 2:

In the case of Aziza and Samantha, each brought her own issues; each couldn’t think of the other enough. As Aziza is not a Christian, I have a little more grace for her neuroses. She has not liked the mommy-only vibe she’s received from (especially Christian) American women. In our conversations about motherhood and identity, she’s strongly cautioned me about having children. She likes her children okay, but finds more fulfillment in work, education, her calling as an artist. Samantha has bought into the conservative Christian ideal of Motherhood and Wifehood as the ultimate—and in some ways, only—calling. Formerly a talented educator, missionary, thinker, Samantha, in my view, has bought into a viewpoint that is very possibly not “her.” Are there women who find being a wife and mother wonderful, fulfilling, joy-inducing, and do it marvelously well? Yes, indeed. I know some of these women personally. [But we shouldn’t forget that this is a luxury that many women, here and abroad, don’t even have the opportunity to entertain as a possibility.] 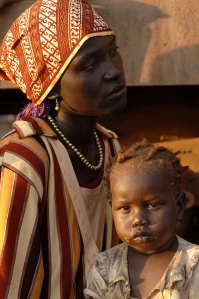 But just as people who find only their fulfillment in their profession, women who find only their fulfillment as mothers are often disappointed. Search for Significance by Robert McGee (while not great in some aspects) first introduced to me the radical idea that anything that is our only identity—other than our relationship with Christ and our calling as children of God—will let us down. If my only identity is as a writer and teacher, I’ll be disappointed. Because some days—and maybe some years—are not very productive, not very publishable. Someday, I’ll be too old to write. If Samantha’s only identity is the children she doesn’t have, she’ll be disappointed. Because one day, even if she has a fulfilling 18 years with them, they will leave and must become independent—and therefore not need her.

After returning Christ to the throne of our lives, somewhere in the middle, I think must be the answer. Egalitarian understanding of marriage and parenthood do matter. But also a balance of relationships and profession.

So I tried to explain to Aziza that not all Christians believed that motherhood was the only God-given profession for women, but also that Samantha might be a little jealous of Aziza’s brilliant and cute children.

And I remind her again that I promise when children might arrive for Charles and me in the future, that I won’t stop writing and go crazy. Yet I know to all those mothers out there, my promise sounds naïve and a little cute. Thanks in advance, Aziza and other friends, for your grace as I root myself in my identity in Christ—and strive to hold everything else in dynamic tension.